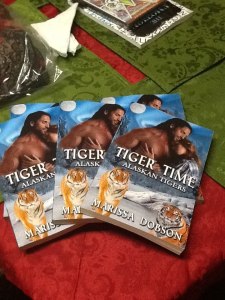 I’ll be doing a giveaway soon.

If you join my street team here you will also be able to enter into another giveaway, only available to street team members.

Posted in Uncategorized. Bookmark the permalink.

Sarah’s Fate the sequel to Snowy Fate has a cover and blurb. This one is heading to edits now but should be release later this year or early 2013. Official release date coming soon.

Sarah McMillan’s life came crashing down when her parents died. Moving across country, she’s determined to pull the pieces together and get on with her life. But when a man steps into her path, all her plans may have been for not.

Josh Andrews spent years searching for his mate, only to find her when he least expects it. Fate brings him Sarah, someone who needs him more than he’d thought he’d needed her But convincing her to be his mate and start a new life might be harder than the journey to find her.

Can Josh convince Sarah to let him in? Or will the fact he is a mountain lion destroy what they could have had?

The Tiger’s Heart – Book Two of the Alaskan Tigers series will be out in January 2013. Cover coming soon.

When the Lieutenant of the Alaskan Tigers Raja Harrison rescues Bethany from the hands of kidnappers he gets more than he bargains for. It was supposed to be an easy rescue, instead he finds the injured Bethany—and his mate. For years he’s avoided the mating topic, believing his job is too dangerous to risk another. But now Bethany threatens to risk that fragile control he’s once had.

A rouge shifter wants Bethany Thompson and is determined to destroy all she holds dear, along with the tiger shifter population. When she’s kidnapped, beaten and forced into the world of shifters, her whole world is turned upside down. The shifter problems now are her problems as her family secret comes to light.

Can Raja and Bethany join focuses with the other elders of the Alaskan Tigers to bring down the rouge shifter? Or will the rouge destroy all Raja serves to protect?

Posted in Uncategorized. Bookmark the permalink.

My tour has started

My tour for Snowy Fate has started. Today I am at Lacey Wolfe’s (HERE) talking about Snowy Fate and my upcoming Live series.

20 – Book Spotlight @ Everyday is an Adventure

15 – Book Spotlight @ All I Want and More Books